Lunaria used to be the guardian of the Fairy Village. Under her guardianship, the Fairy Village remained distant from the darkness. In the tranquility of the night, her serene magic stimulates growth of the vegetation while the people sleep soundly in their dreams. As darkness descends upon the world, Lunaria retreats into the shadows of the night, awaiting for fate to awake her once again.

As the imperial bodyguard captain of the Kingdom of Snow, he has a valiant record of heroic achievements, and wields a sword bestowed upon him by the King - an emblem of supreme honor. His sword skills are exquisite. But despite his dazzling swordplay moves, he would rather wield a broadsword and charge ahead, protecting his comrades.

While it is rumored that she is over three hundred years old, she still retains the look of a damsel and carries herself with an exceptional aura of elegance. Which is why all the men on this land are attracted to her, including the Rose Knight. 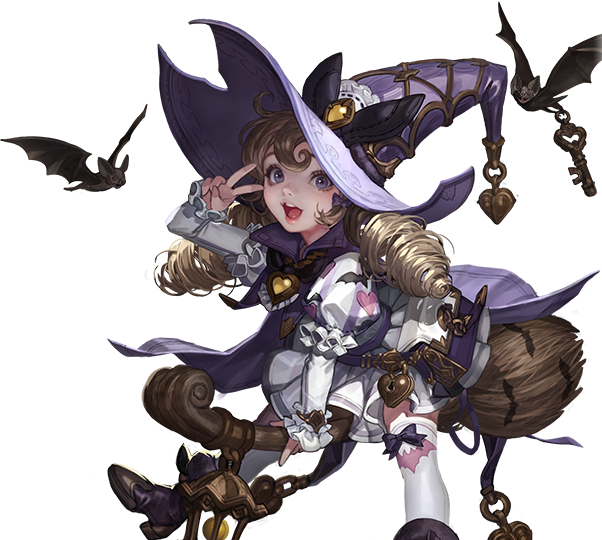 The mischievous magician girl enjoys riding on her enchanted broom and going on adventures. Her broom has been imbued with mysterious powers and emits a constant faint glow. As the new tenant of Paradise, she is planning to seek thrills and excitement for her otherwise monotonous lifestyle.

As the successor to the throne, it seems a bit too early for him to ascend to power at such a young age. He has many enemies eyeing his Kingdom. He grieves the turmoil of his country and the disunity of his subjects. His memories of his past have become somewhat vague, perhaps as a result of his fall from the sky, but his new life and companions have also brought him joy which he has never experienced before.

He came from a distant planet, with a civilization far ahead of Elysium by several thousand years. One day he had a dream where he basked in the company of countless beauties. They had voluptuous figures, angelic looks, flawless skin as well as divine wings. After he awoke, his mind kept thinking about the angels in his dream. And so he embarked on his interstellar journey that lasted over a hundred years, traveling across countless stars. 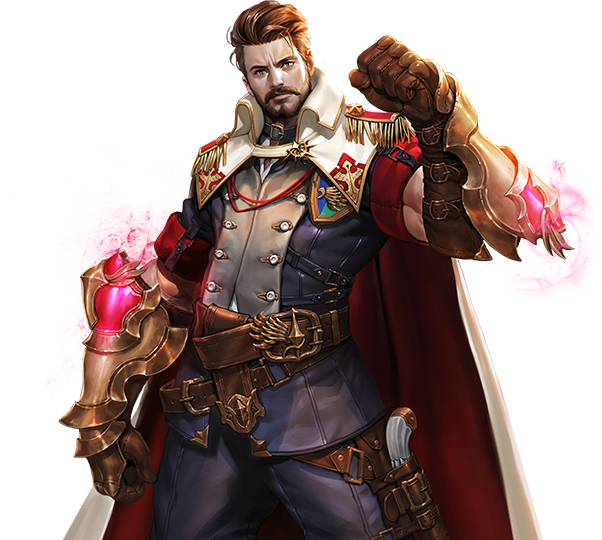 He was once the imposing invincible general on the battlefield, leader of the well-known mercenary group on this land. He emerged victorious in a crucial battle and was bestowed the highest honor. But his beloved wife, son and daughter were caught up in the conflict and suffered a tragic death. He was tormented and chose to leave. For 10 years, he has walked the length and breadth of the entire continent.

She was only four when she stepped onto the battlefield. She lost both her parents and was brought back to the Kingdom after being found in the Templar. Because of her exceptional camouflage capability and agility, she began to receive assassination training in the Kingdom at the age of four, and became the trump card of the Kingdom's mysterious assassination forces ‘Feather' by the age of 10. 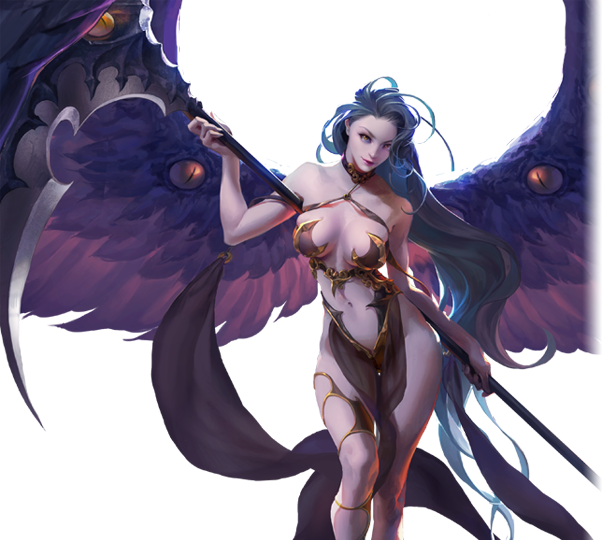 Rumor has it that when the Angels race descended upon the Human world many years ago, they were betrayed by a treacherous villain. Since then, she became full of hatred and bent on taking revenge. To exact revenge, she colluded with the Grim Reaper and acquired the Scythe of Vengeance. As her demonic powers grew, she became more indifferent, and even slightly demented. 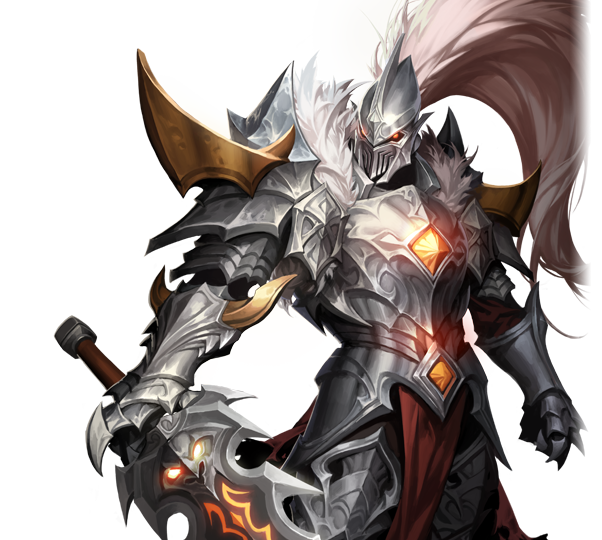 His real identity has long been forgotten by the people. He was one of the survivors of the first Great War, thanks to a demonic sword he stumbled upon during the battle. When he held the sword, he was overcome with an ancient, evil power. But in that moment, the screams of the dead rang through his head and have haunted him ever since. Was this a curse or a blessing? 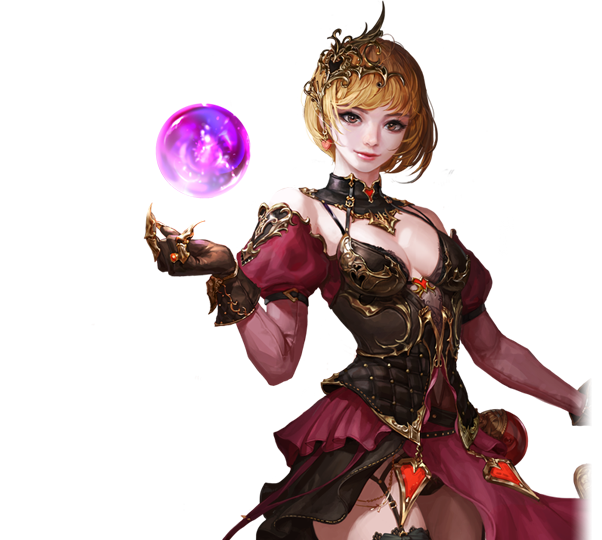 Her past arrogance led to a catastrophic disaster, triggering the first Great War. The Angels race imprisoned her as a punishment. It is rumored that she will be liberated and regain freedom when the Demon King awakens once again.

Although the veteran general guarding the fortress is getting on in age, he is still the best defender in the league. The fortress he defended had never been breached, where he resists all attacks with his steel shield, and launches terrible counterattacks with his great axe. 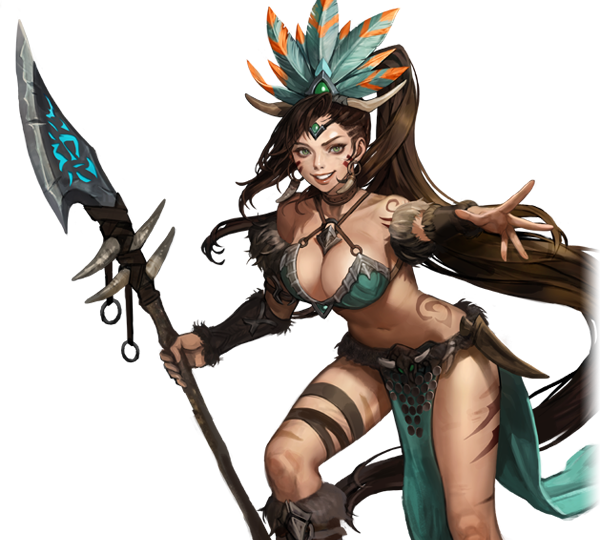 An Amazon warrior who has lived in the wild since childhood, she is able to communicate with the wild animals to gain their trust. Not only is she deadly accurate with her throwing daggers, she can hold her own in melee combat as well.

Often called a mad scientist by his peers, during one of his experiments, he was consumed by a thunderstorm he had created. Although the lightning destroyed his body, his will fused with the lightning and become the core for his powers. He has became a being of pure electricity, able to manipulate lightning at will. 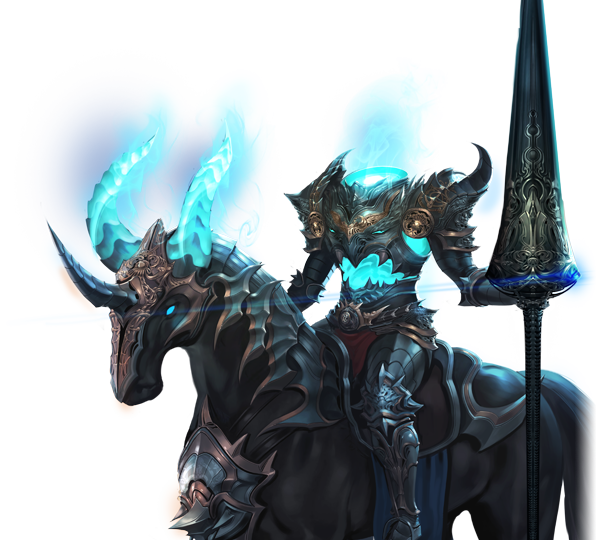 Before becoming the Headless Horseman, he was the Prince of a mighty human kingdom and a valiant knight whose mount was a celestial beast blessed by the Gods. The Demon King deceived him into becoming a Soul Reaper to harvest human souls. Now he roams the land as a terror of the night.

A renowned Angel of War. She forsakes all her defenses on the battlefield so as to wield the unstoppable great axe. It was rumored that during the Great War, the entire demon legion was awed by her aura and refused to engage in battle for over a hundred days. She is hot-blooded, belligerent, a valiant fighter on the battlefield. Of course, like other angels, she has her own special magic: Frost.

A highly respected martial arts grandmaster from the Zen race. It is rumored that he is over 600 years old, wise, and far-sighted. His muscular physique, vigor and forceful staff skills is matched by no one in the Zen race. He set forth west on a journey towards Elysium, to find out if there are heroes on this vast world who can defeat his staff skills. 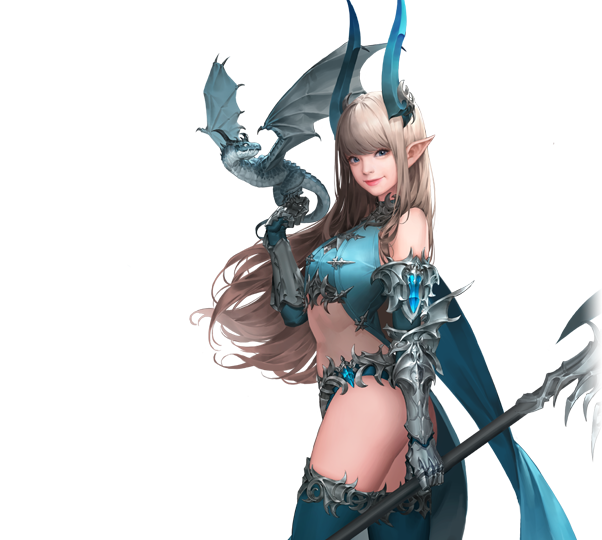 The Princess of Draconus with the powers to summon the Sacred Dragon. Part of the most noble bloodline of the Draconia people and born with a strong physique, she shed her glamourous princess life in exchange for a suit of silver armor and the battlefield. Her strong defense abilities has made her a highly trusted protector. 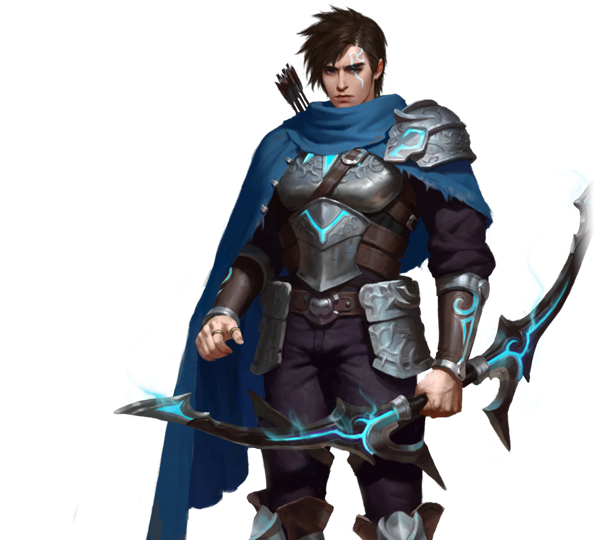 He lurks in the dark nights, and can silently assassinate any target without a trace. His archery skills are unparalleled and possesses the forbidden skill, the fatal shot, nemesis of all things magic. His archery skills are at their peak, and he has the ability to unleash devastating powers even with an ordinary bow. Not only is his accuracy perfect, his shooting speed is also unparalleled. 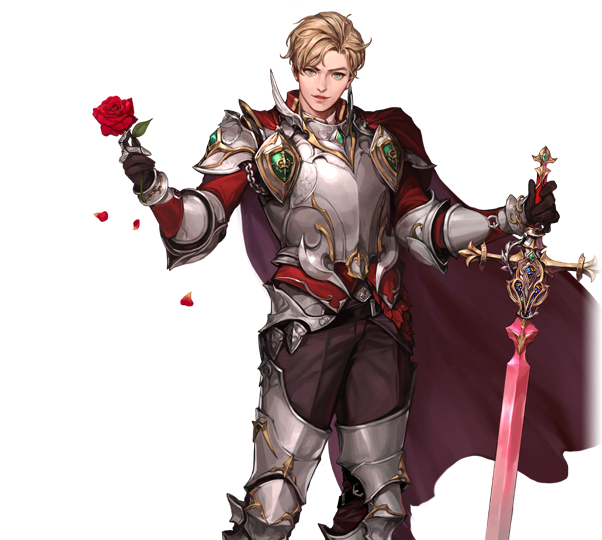 A young and charming royal knight apt with the rapier. He has been practicing the art of fencing in the palace since his youth, and his swordsmanship is magnificent. However, he is more confident of his appearance, and constantly maintains an elegant smile on his face. He is passionately devoted to the worship of elves. He will gift roses and confide his love for them during each encounter, and as such earned the title of the Rose Knight. 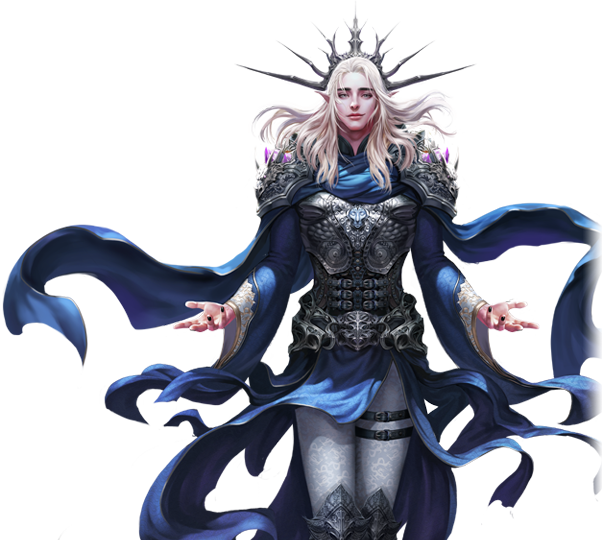 The legendary Elf King, he was born with the innate ability to conjure metamagic Thunderburn. In order to stand against the young and vigorous Elrodil, the King of Darkness unleashed an equally powerful Frostfire which created a space explosion. Since then Elrodil disappeared without a trace, but suddenly reappeared with a wild ambition to unify the land. 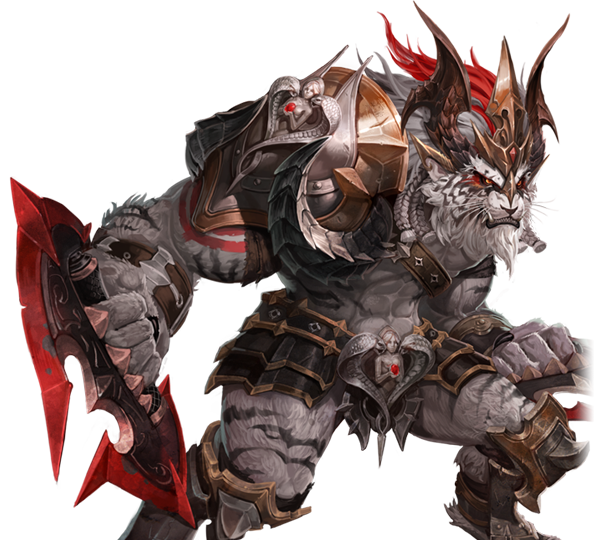 The king of beasts, powers of the wilderness. He is one of the guardians. Due to the inheritance of the White Tiger's powers, his physique has also transformed dramatically. Stemming from the confidence of his irrepressible powers, he would often single-handedly charge against the invaders. 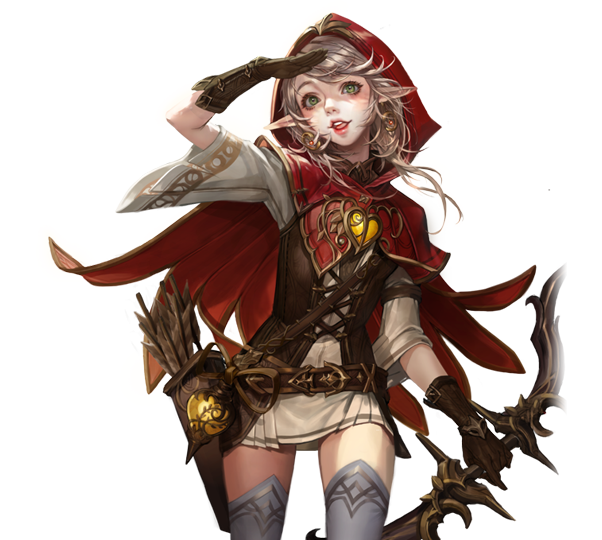 Guardian of the Forest and a mysterious girl. With both elven and human descent, she has been living alone in the forest. Here she has honed her archery and trapping skills to excellence while silently guarding her forest home.

As the last descendant of an ancient and powerful vampire race, she has pale skin and crimson eyes. The ancient power of a vampire lord is sealed within her body. When it comes to speed, she is the undisputed champion in this land. Her ruthless and coldhearted nature makes her the perfect assassin. 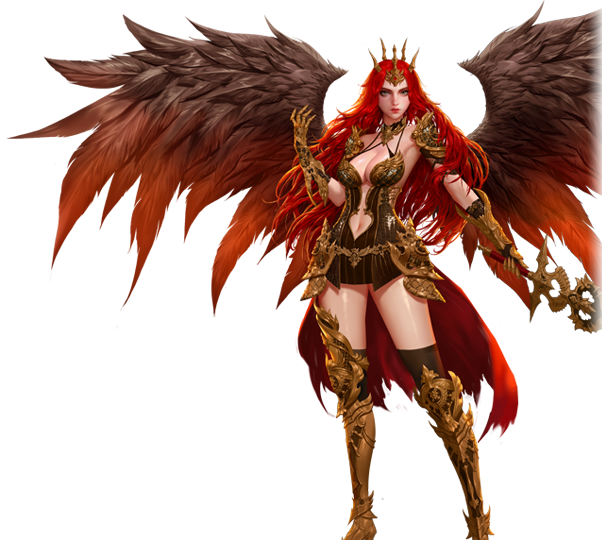 Legend has it that she is the most ancient warrior among the Angels race. In the first Great War, her fiery flames incinerated the darkness and ushered in the light. She is born from the sacred flames and possesses true immortality. Every death bestows her with rebirth like a phoenix, as well as becoming even more powerful. 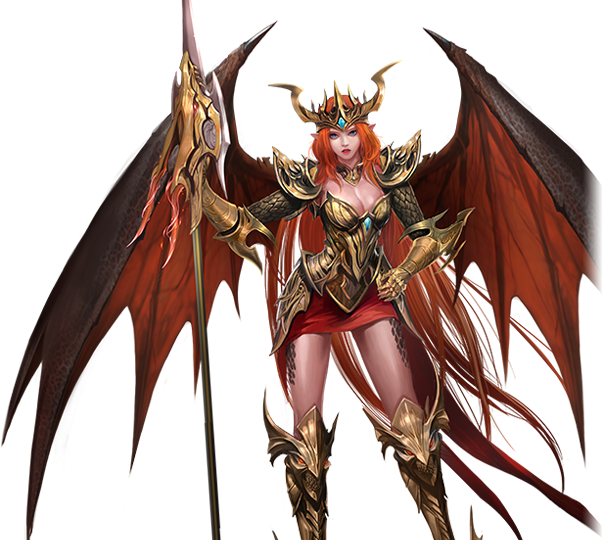 She is the only known hybrid between Angels and Dragons. Since birth, her unique half-breed identity has never been accepted by either race. With the decline of the Angel race, she disappeared subsequently. Perhaps her flaming dance might still befall upon our world someday. 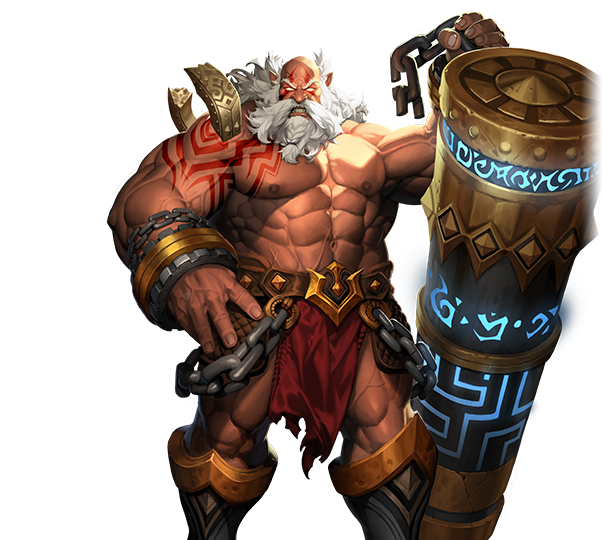 He craves battle and seeks the battlefield. Earthshaker does not possess magic nor does he require it, because he has terrifying power that can crush anything. His weapon is the Pillar of Hercules - a legendary weapon forged to conquer. He shows no compassion or mercy in battle. 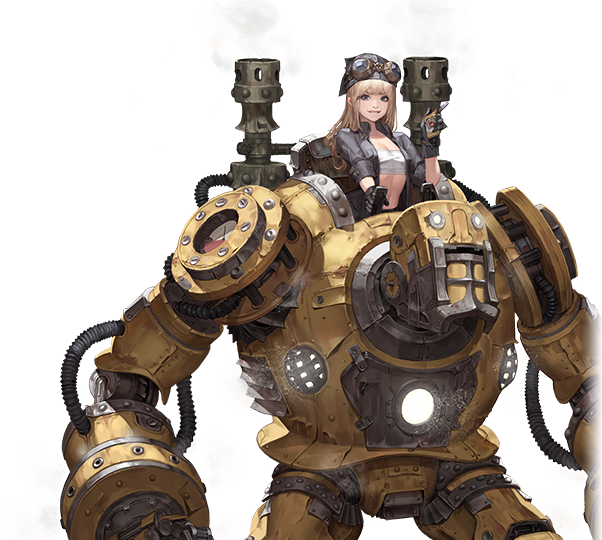 Both she and her father were scientist freaks. Her father was focused on the study of biology while she was obsessed with robotics research. They teamed up to produce the first mech warrior on this land. Despite the lack of combat experience, she has no fear for any enemy thanks to exceptional robotic manipulation technology and the formidable mech warrior she possesses.

Lunaria used to be the guardian of the Fairy Village. Under her guardianship, the Fairy Village remained distant from the darkness. In the tranquility of the night, her serene magic stimulates growth of the vegetation while the people sleep soundly in their dreams. As darkness descends upon the world, Lunaria retreats into the shadows of the night, awaiting for fate to awake her once again. 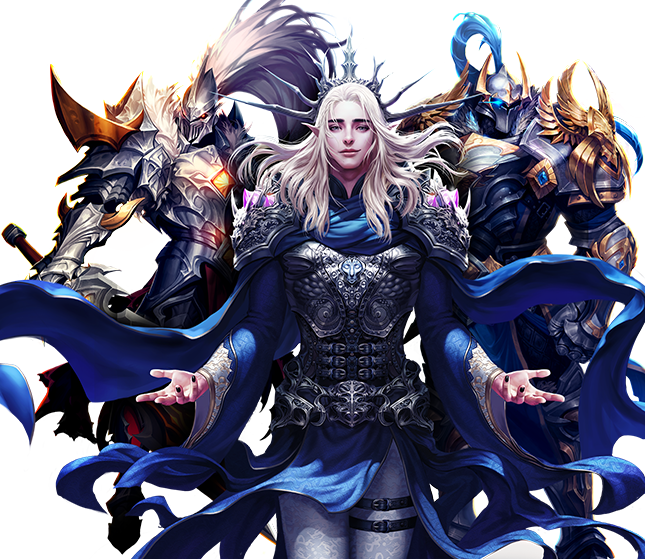 The story of Paradise Land takes place in the world of Elysium, where a nefarious power has toppled the rule of the Angels. The strife between the Humans, Elves, and Orcs have intensified even more. When the Prophecy of the Apocalypse spread across the land, it became woven into the fabric of fate.

In LoA-PL, you have multiple ways to strengthen your team. You can recruit Heroes, Augment and Ascend their power, learn and upgrade powerful Skills. There are also thousands of Hero Equipment to find; Upgrade, Refine, and even Awaken them to unlock their true potential. 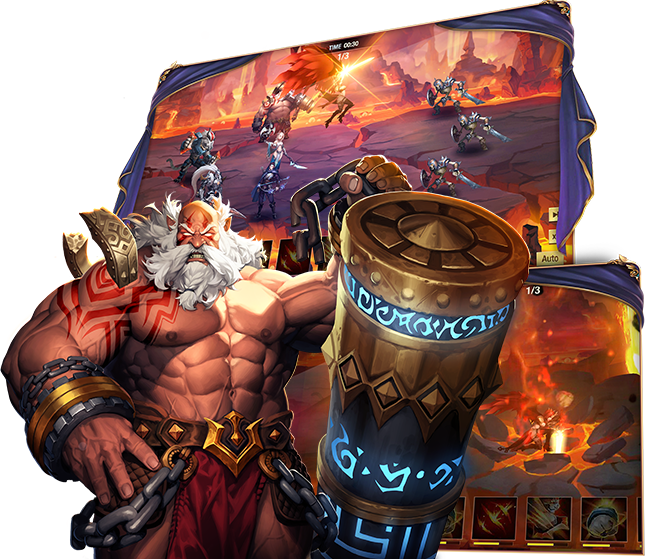 With a senior art director from GTA5 overseeing the game’s design, you can expect beautiful 3D graphics and dynamic scenery to make the battle more stunning. LoA-PL will challenge you the skill to build teams. Will your team be able to survive all kinds of difficulties?

Except the traditional RPG experience, LoA-PL will also provide you varieties of game modes, including Honor Trial (Dungeon-crawling game mode based on the Roguelike genre), Labyrinth (Explore the darkest depths, find hidden treasures, and confront epic Bosses), Arena (Battle players around the world, use strategy to conquer your rivals)

The guild function allows you to make friends with other players in LoA-PL and grow stronger with each other. You can either build an international guild where you can meet players from all over the world, or have a domestic one so that you can compete foreign guilds.